In the early 1990s when I was training to be a GP  the word ‘cancer’ was unspoken, often referred to as the ‘Big C’. Patients did not want to be told they had cancer; in their mind it was associated with a certain and unpleasant death. Proper support from clinicians, charities and care in hospice was in its infancy. Nor was cancer discussed in the media or the arts. One of the first books I remember that honestly discussed the impact of cancer even evaded using the word cancer in its title- ‘C’ by John Diamond. What followed was the birth of a new genre of books and media articles in which patients and clinicians shared their experiences of life and death with cancer.

One in three of us will receive a diagnosis of cancer at some point in our lives. It’s common for cancer to be diagnosed before any symptoms appear. Some cancers are so benign that they don’t ever impact on life expectancy leading to a debate about whether they should even be called a cancer. For most being diagnosed with cancer results in emotional turmoil even if the disease is curable.

Cancer is now openly discussed by clinicians and their patients, on the TV and in the media. The shelves of bookshops and the webpages of blogs are burgeoning with individual’s experience of cancer. Despite this, how we suffer and live with cancer remains a deeply personal and individual experience.

I hope that these arts resources will help you explore the impact of ‘cancer’ on life.

books to prompt thought and discussion about cancer 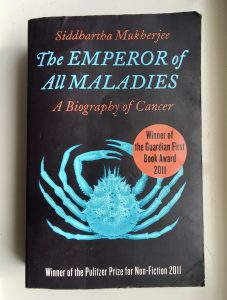 This factual book is a great starting point- it sets the scene.

The Emperor of all Maladies – A Biography of Cancer Siddhartha Mukherjee

There are many books written about people’s experience of cancer. These are two very good examples.

Before I say Goodbye Ruth Picardie 1998 Published by Penguin

When Ruth was diagnosed with terminal breast cancer it was not common to read about cancer in the media. Ruth’s sister, Justine, editor of the Observer Magazine, Life  encouraged her to write a column about her experience of life with cancer. The column was called ‘Before I Say Goodbye’. It quickly gained many followers. In the end Ruth only completed five columns before she became too ill to write. After Ruth’s death, Matt, her husband collated and published the columns and a collection of emails Ruth wrote to friends and family . These were published in 1998 as the book ‘Before I Say Goodbye’.

In her book, Ruth said, ‘what hurts most is losing the future. I won’t be there to clap when my beloved babies learn to write their names.’ It is a deeply personal account of Ruth’s experiences of cancer and dying but her references to the humdrum of everyday life and her humour makes her story so relatable and meaningful.

I’m sure that Ruth’s book encouraged other people to share their stories and talk openly about their hopes and fears.

So Much for That Lionel Shriver 2010 Published by Harper Collins

The novel tells the story of Shep and Glynis, their friends and family. Shep’s dream to sell his business and retire to ‘paradise’ has to go on hold when Glynis reveals she has a rare and fast-growing cancer and needs both his medical insurance and savings. As Glynis’s cancer progresses her care costs increase and the couple are forced to face the impossible question: how much money is Glynis’s life worth? Shriver explores the deeply uncomfortable interface between health and wealth in America and the impact of chronic illness on relationships. The story also highlights the challenges clinicians and patients face in deciding when to stop active treatment and start palliative care.

An easier but no less harrowing book is Jodi Picoult’s book, My Sister’s Keeper. It’s been made into a film, but – ‘spoiler alert’ –  the ending is very different

Clinicians have also written about their experiences of caring for patients and family with cancer. 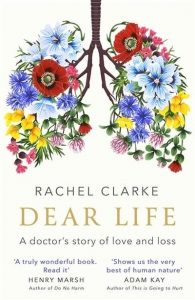 The recently published book, Dear Life by Rachel Clarke is a moving narrative of her experiences as a daughter and palliative care consultant. The book has been serialised on Radio 4 and can be heard on BBC Sounds.

When I listened to her reading the book one experience while she was a junior doctor particularly resonated with me. Referring to an event where she stopped active treatment for a patient with terminal cancer and allowed him to die with dignity she discusses how she was not prepared for how wrong doing the right thing felt.

Another book that is highly recommended is When breath becomes air  by Paul Kalanithi about his diagnosis of lung cancer. You can read a good review of this book at The Doctors Book Shelf.

Poetry to prompt thought and discussion about cancer

I have used the poems by Julia Darling many times in my teaching.

‘Julia united humanity, creativity and health in her poetry, prose and plays.’  She was a prolific, and well-respected UK writer, poet and playwright. Her website is a wonderful, colourful and inspiring tribute to her life and work.  Sadly she developed breast cancer and died in April 2005.  Her illness inspired her work and helped her cope. Her work is an amazing resource for doctors to learn more about the impact of illness and treatment especially cancer on peoples’ lives.

Julia said the poems she wrote helped her to take control of her illness, improve her health and communicate with her doctors. Writing for the Poetry Book Society bulletin in autumn 2003, she observed: ‘I wrote poetry in waiting rooms. I made up poems while I was having scans. Somehow this was defiant and empowering. I forgot to be a patient, I was so absorbed in another world’

The two poems I refer to most are End ﻿and Too Heavy. You can read both on her website.

Julia said ‘I believe that poetry can help make you better. Poetry is essential, not a frill or a nicety. It comes to all of us when we most need it. As soon as we are in any kind of crisis, or anguish, that is when we reach out for poetry, or find ourselves writing a poem for the first time.’

The power of words

Recent research has shown that the words clinicians and patients chose to use when talking about cancer impact on management, not always in a helpful way.

Think about the terms you have heard to describe the impact of cancer on someone’s life.

I’m sure many of the phrases you recall will be military metaphors, starting with how cancer invades the patient’s body, leading to the patient battling with symptoms, hoping to conquer the aggressive enemy within, but it’s not a fair fight and so cancer often wins and the patient loses his or her battle. Patients often say they don’t have cancer they fight it, and drug companies and charities lead the way in raising expectations that we can conquer cancer.

Metaphors can be helpful, but care needs to be taken that their use is helpful to the patient.

This Radio 4 podcast is an excellent discussion of the impact of words and language on people who have cancer.

Fighting Talk: How Language Can Make Us Better

You may need to login to BBC Sounds Iplayer to listen to this.

The other resources in this section all pick up this theme. Remember language is powerful and personal, take time to find out which words your patient wants to use, you may need to broaden their vocabulary, and this may form part of what helps them manage their life with cancer.

Pictures to prompt thought and discussion about cancer 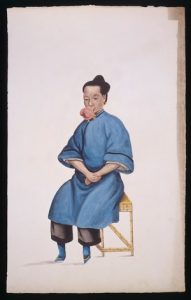 In the UK it’s now very rare to see someone present with a large mass or disfiguration. But it was not always like this. In many countries people still do not choose to seek help or cannot access care and have to live with disfiguring and disabling masses.

The artist Lam Qua was commissioned by the American physician Peter Parker to paint pictures of the patients who sought care at the Cantonese hospital Parker opened in 1835.

You can see more of his work in the Wellcome Collection

What do you think about this picture?

Films to prompt thought and discussion about cancer

There are many films produced about life and death with cancer. Many are overly sentimental and the types of cancer portrayed do not represent the distribution of cancer types seen in real life. This article discusses how Hollywood films portray cancer.

I would recommend Wit 2001, staring Emma Thompson. The film portrays life and death with ovarian cancer. It’s a great film to use to provoke discussion about breaking bad news (how not to do it). Take note of the music chosen to accompany the story line.

The 1991 film The Doctor is also highly recommended. This film stars William Hurt as Jack McKee, a  doctor who undergoes a transformation in his views about life, illness and human relationships following his diagnosis and treatment of laryngeal cancer.

You can find more resources on these pages  Death, dying and end of life care and Loss.

These are my ideas so far.

What resources have you found that might be useful additions to this page? Do contact me with your ideas.