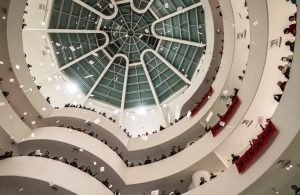 It’s not just social prescribing that is making political headlines. In February, US photographer and activist Nan Goldin brought the Guggenheim Museum in New York to a standstill by staging a protest against it accepting donations from the Sackler family who own the makers of OxyContin, the prescription painkiller at the centre of the US opioid crisis. Goldin has first-hand experience of the dangers of opioids as she herself became addicted to OxyContin following surgery.

This photo, published in the BMJ, shows demonstrators throwing fake prescriptions from the atrium, creating a blizzard of paper. They also handed out fake pill bottles and lay on the floor, as if dead, to represent the 49,000 people a year who die in the US from opioid related overdoses.

At the OxyContin launch party Sackler, was reported as describing the potential popularity of the drug as a ‘blizzard of prescriptions that will be so deep, so dense and white’. This blizzard of prescriptions while making millions of dollars for the Sackler family has caused a deep and unrelenting crisis for millions of patients in the US and across the world. Last week’s London Review of Books published an article with the title ‘A Blizzard of Prescriptions’, the article picks up the opioid story by highlighting the reasons behind Goldin’s protest and reviewing several books that have been written about the opioid crises. It’s sobering reading and raises questions for all doctors who prescribe opioids.