Many people feel sight is the most valuable of our five senses. 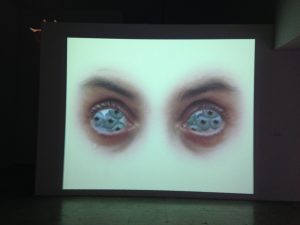 Visual loss is defined as the decreased ability to see, to a degree that causes problems that are not fixable by simple means, such as  glasses. 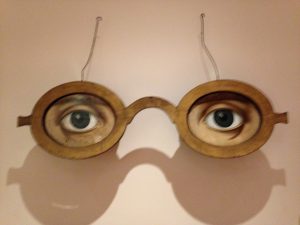 Notes on Blindness by John Hull

In 1983, after many years of a gradual visual loss, the writer and theologian John Hull lost the last traces of light sensation. For the next three years, he kept a diary on audio-cassette of his interior world of blindness.

These are excerpts from his audio diary.

‘The world into which I am being dragged with my loved ones will engulf us.
There will be no return.
Blindness is permanent and irreversible… My life is in crisis.’

‘Six weeks have passed now since the haemorrhage. I had expected, in time, to accommodate my blindness, my hemispace, but this has not happened. Every time someone or something suddenly appears to my right, it is just as unexpected as the first time. I am still in a world of suddenness and discontinuity, of sudden apparitions and disappearances.

‘Don’t expect me to recognise you by your voice. Face recognition is instant but voice recognition can take weeks. I ask my incoming students to identify themselves when they greet me’.

‘For the blind, people are not there unless they speak. Many times I have continued a conversation with a sighted friend only to discover that he is not there. He may have walked away without telling me. He may have nodded or smiled, thinking the conversation was over. From my point of view he has suddenly vanished.’

The transcript can be read in his book and excerpts from the tapes heard online.

His story has also been made into a film, ‘Notes on Blindness’

‘Seeing comes before words. The child looks and recognises before it can speak.’

‘The way we see things is affected by what we know or what we believe.’

Ways of Seeing by John Berger

‘The mind is the real instrument of sight and observation, the eyes act as a sort of vessel receiving and transmitting the visible portion of the consciousness.’

What do you think of Pliny’s observation on sight?

pictures and poetry to prompt thought and discussion about visual loss

Paintings and pictures are a visual medium that usually requires both the artist and the observer to use their visual sense to fully appreciate the execution and development of a composition. When looking at visual art the viewer should be reminded not merely to reflect on what they see, but also to consider what the artist saw during the creative process. Edgar Degas poignantly put it:

‘Art is not what you see, but what you make others see’.

Take a look at the work of Rachel Galsden, a visual artist who has visual loss due to retinochisis.

In this painting the blind artist has abandoned his painting and is using his sense of touch to explore the sculpture.

Historians have suggested that many famous artist’s suffered from visual loss or visual disturbance and this is reflected in their work.

For example some art historians and doctors have suggested that subacute angle closure glaucoma or the visual disturbances associated with migraine may have accounted for Van Gogh’s ‘halos’ such as those in‘The Starry Night’.

In his 60s, Monet started to develop bilateral age-related cataracts  He complained that ‘colours no longer had the same intensity for me’, that ‘reds had begun to look muddy’ and that ‘my painting was getting more and more darkened.’ To avoid choosing the wrong colours, Monet labelled his tubes of paint and keep a strict order on his palette. 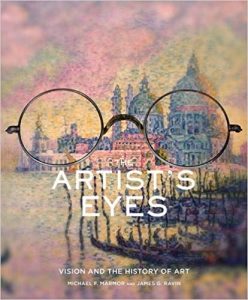 Borges was an Argentinean writer and artist who experienced progressive visual loss. He drew this self-portrait shortly after becoming completely blind aged 56. 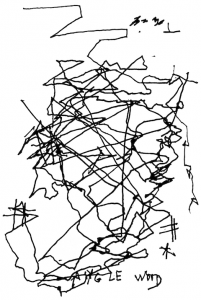 He wrote this about his experience of visual loss:

One of the colours that the blind or at least this blind man – do not see is black; another is red. Le rouge at le noirare the colours denied to us. I, who was accustomed to sleeping in total darkness, was bothered for a long time at having to sleep in this world of mist, in the greenish or blueish mist, vaguely luminous, which is the world of the blind. I wanted to lie down in darkness. The world of the blind is not a night that people imagine.

and he wrote this poem:

In the fullness of the years, like it or not,
a luminous mist surrounds me, unvarying,
that breaks things down into a single thing,
colourless, formless. Almost into a thought.
The elemental, vast night and the day
teeming with people have become that fog
of constant, tentative light that does not flag,
and lies in wait at dawn. I longed to see
just once a human face. Unknown to me
the closed encyclopaedia, the sweet play
in volumes I can do no more than hold,
the tiny soaring birds, the moons of gold.
Others have the world, for better or worse;
I have this half-dark, and the toil of verse.

music to prompt thought and discussion about visual loss

Watch this amazing story of visually impaired artists coming together with musician, Marie Naffah to produce a piece of music called Blindfold

books to prompt thought and discussion about visual loss

All the Light You Cannot See Anthony Doerr

The Story of my Life Helen Keller

films to prompt thought and discussion about visual loss

Page created with help and inspiration from Beth Jakeman